It took 4 months to conceive L, and it felt like 4 very long months.  We longed for another baby.  I was at the point of being obsessed with my cycle and looking on the net for different conceiving ideas.  We know our children are from God and He has the ultimate control over life.  We also knew that God had laid on our hearts to have another child.  I was impatient and just wanted to help the situation along... There are so many different suggestions to help you conceive and even gender swaying techniques online.  We decided to try the 'sperm meets egg plan' (not a gender swaying plan but a plan to help maximise your conception chances) I think it gave it us a renewed focus rather than dwelling on the failed previous attempts.  It was quite a commitment but we did get pregnant! After losing a child, I did feel really anxious about conceiving again but we had to keep praying and laying this down at the cross.
Early pregnancy was a real test of faith.  I was really scared of losing the baby.  I did 2 tests about a week apart and the line looked stronger on the second test which made me a little more confident.  We kept on praying.  Also a friend had said to me - "you're expecting a baby not a miscarriage" which really helped me.  After 9 weeks I felt a lot more relaxed.  We made sure we told some of our friends and family when we found out, and we made a point of enjoying this pregnancy.  Learning the lessons from last time, we wanted to give this life joy, however long he would be with us.  We purposefully did not find out the sex this time.  I was so thankful just to be pregnant, I really didn't care but at the same time I know I don't think very rationally when I'm pregnant and did not want my brain to 'overthink' and come up with incorrect conclusions! It was great to have the surprise and I really couldn't of cared if it was a boy or not.  It was great to experience this freedom - Thank-you God for your grace and our beautiful son!
I had learnt, from my careful eating, that I put on weight when pregnant regardless, so I decided I would eat what I liked and be happy this time round.  It was great.  I wanted to eat big fat juicy burgers - I even had a rustler - which is a disgusting processed microwaved burger but I really did enjoy it.  I loved feeling the baby move, getting bigger and getting new bits for the baby.  Although its uncomfortable and I was a little snappy with my closest I did enjoy it.  I signed up to the baby clubs and forums and decided to make the most of being pregnant.  We even did a cast of my tummy.  However, I did not enjoy being 10 days late!! I wanted to meet my baby and hold him in my arms, by the time I was due I had well and truly had enough.
The labour was really difficult.  It was 7 nearly 8 hours of intense labour pains (double contractions is what the midwife called them).  I wanted to have an epidural but they were too busy, in fact they shortly closed the maternity ward after I had left as over capacity.  My labour experience was not good this time round and I was pushed home within a few hours of giving birth, as no room.  I had nightmares every time I went to sleep for a week afterwards.  I also had an infection which they did not pick up on, which also led to a secondary infection.  However we were still joyous over our newborn.  He looked so small and helpless, it was great to have a baby back in the house.  I had missed this without even knowing it. 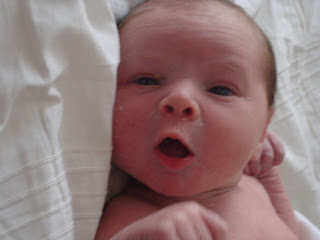 I did not recover from birth very quickly at all and felt I needed to, in order to do my job of being a wife and mother.  I thankfully had and accepted lots of help, in terms of meals being cooked, ironing, taking children to and from school.  My husband was a great support and I gave him a list of priorities -
1. Toilet kept clean and loo roll to be present
2. Food in the house
3. Clean clothes
4. Clean down kitchen sides so no bugs
When I was pregnant, I had made lots of meals that could be easily microwaved for dinners and written a list of contacts for help. I had to live in mess but it was ok as long as above was met, I was happy.  Although we don't have family around us, we are surrounded by our church family and they came together and helped us.  God has shown me not to be independent but dependant on him.  We were so blessed by his church and so grateful for all the support we received. Thank-you God for showering us with more of your love and grace!
After a couple of months, I had recovered from giving birth and was in the swing of being a mother of 4.  Its harder to maintain a routine when you have school aged children as you have to take them to and from school at certain times, throughout the week.  L has not been in such a rigid routine like the others but we have certainly enjoyed him and our other children, which was our top priority!
Posted by The James' at 20:42