After B turned a year.  A couple of my friends had announced they were pregnant.  Although I couldn't imagine having another one at that point (as it wasn't that long ago that I started coping with being a mum) it did get me thinking. After the next few months, I enjoyed B more and more.  I had become a christian and now viewed life with purpose.  I was at the point where I was about to come off my medication and was feeling very broody.  We decided to try for our second child.
We conceived in the first month of trying.  I was so pleased as I suffered with no sickness and had instant bump.  I did have some weird cravings though - brown sauce and gherkin sandwiches.  I also really wanted bacon, which as I was a vegetarian, was very annoying.

Emotionally, pregnancy was hard.  B was into everything and although I only worked part time I could not rest, as had an active toddler to chase around.  In fact work was more restful.  I had so many worries with this pregnancy.  I could not indulge in afternoon naps or eat whatever I fancied (as I had a toddler who would also want to eat it, and I wanted him to eat healthily). I had food poisoning at 10 weeks, B had parvo virus/measles and there was no record I was immune.  This can be fatal to a pregnancy.  Thankfully after some blood tests it showed I did have immunity and that I had not contracted the virus.  I also had bleeding at 22weeks, which was very scary, as thought it was all over.  On top of that, I was worried about having another boy, if I could breastfeed, if the baby would suffer with colic again.  I was worried about about how I would juggle the 2 of them and whether I would love them the same.  Having experienced a newborn before, I had more worries this time.  Yet through all of this, God met with me.  I went through cleansing streams, which helped counsel me through some of the issues I had.  Also I was given a word - That God would restore the crops that the locusts had eaten.
When N was born, it was amazing.  I had the natural water birth and labour was only 6 hours (after 12 hours of practise contractions).  He was not tongue tied and he did not have colic.  He was such a happy content baby.  I enjoyed him from the start.  I did not suffer with PND and there was no grey cloud over his birth.  I felt such love for him.  In fact I quickly learnt that love multiplies and its not divisible.  All the worries I had when pregnant had gone.  I was only able to breastfeed for a couple of days as his weight plummeted and he was not thriving on my milk.  I did feel guilty about this, but its better to have a healthy formula fed baby than back to hospital and no baby. 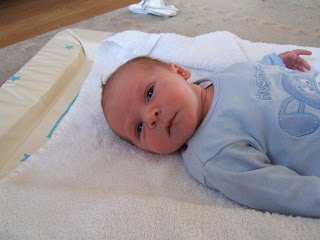 Life I found was easier with 2 children.  There is 2years and 3 months between B and N. B was such hard work that having N made me take time out.  It made me ignore some of his bad behaviours and concentrate on what had to be disciplined.  This meant he was not receiving my constant attention for all the bad things he did, which actually improved his behaviour as I rewarded the good.  He could also see that I was busy.  B loved N, he loved having the company of a sibling.  B loved to be helpful and be a big boy.  He enjoyed helping his brother and fetching nappies etc.  We lived in a small house so we were always together.  I also made a point of putting N down after feeds and playing with B so jealousy would not come into it.  We went out to lots of groups as B was still active and needed time to burn off energy.  I also learnt to sit on the floor with my legs dividing the activities so B could play his big boy games with me and at the same time N was occupied with age suitable toys.
Having N was easy, as I had learnt all about having a routine from B and it was easy to implement.  Life was busy though, entertaining an active toddler and looking after a baby.  B decided he wanted to be potty trained a few weeks after N was born, so that met with a few challenges but I really enjoyed these days.  I was tired, as with your first you can sleep when the baby sleeps, you don't realise how easy one baby is to look after until you have more.  There were still points of anxiety and days I would like to have cancelled but if I'm honest I had those days with just one and I had those days with no children. Even when they thought N had milk allergies and had to keep going to hospital with fresh stool samples, life was pleasurable.  N was fine when he was weaned and cut his tooth at 6 months. I really enjoyed the baby days with N and God was true to His word.  He restored what I felt I had lost out on with B.

Being a family of 4 felt great, it felt like we are a proper family now.
Posted by The James' at 09:17