As N was such a joy we could not wait to have our 3rd child.  We wanted to start trying straight away, I think it was about 3 months after having N.  (Even though we'd been talking about it since N was born).  However we did not conceive straight away this time.  Each month ended with no baby in sight.  It is really depressing when your trying and nothing seems to be happening.  You seem to see lots of pregnant women and notice every stage of your menstrual cycle, wondering if this is going to be the month.  After about 4/5 months of trying, we decided to postpone.  I wanted to get my body back and take a break.  After a couple of months of not trying and using protection, I fell pregnant!
It was on Christmas day, I remember sitting down at the end of a very busy day feeling very tired and drinking some wine.  I suddenly remembered I was late - I'm never late.. The following morning, I took a test (that I had left over from when we were trying).  It was positive. I then told Jon to close his eyes, as there was another present we had, I put the clean test in his hands and we were both thrilled at the news of our gift!
This was also another very emotional pregnancy.  Early on I was really worried about miscarrying, as some of my friends had.  It was awful.  I never worried about this with my first, as much as I did with subsequent pregnancies. I think this is because I was a lot more aware of what can go wrong and also now I had experienced how wonderful the gift of children are, I did not want to loose it.  I remember seeing something about phantom pregnancies on the television and was so convinced this is what I was experiencing.  Even though it was pregnancy number 3, I had a positive test I was still worried. I remember going for the 12 week scan and telling the midwife my concern but thankfully J was there kicking around and full of beans.  I remember feeling nauseous but not being sick with this pregnancy.
This pregnancy was very tiring as I had both B and N to look after.  I had to have an afternoon nap this time.  When N went for his afternoon sleep, B had quiet time time in his room, which allowed me to rest.  It wasn't a proper sleep but it was time to lay on the sofa and not move.  I was so conscience of what I ate as did not want to gain too much weight.  I did not enjoy the pregnancy or have much time to get bonded to the baby, as so busy with life and looking after B & N.  Having a bath was my time to bond and relax with baby.  I re-decorated the nursery as I had with previous pregnancies but there was not a lot to get or coo over.  With pregnancy 2 we went out and got all the bits we wished we had with pregnancy 1 and we knew what not to buy from experience.  This time round we had everything.  It was also quite different as I didn't really show until I was 24 weeks.  With B, I carried so much water and was so swollen.  With N, I showed straight away and had no sickness, now I was different again.  I thought because of this, I was carrying a girl.
I loved the idea of having 2 boys and a girl.  It hit me really hard when we found out it was another boy at our 20 week scan.  We both really wanted a daughter and after the scan, we looked like we had received the worst news ever.  I do love our boys (they are certainly not 2nd best) but thought I would give you an honest account of how I felt at that time.  I felt really sad.  I felt angry at God, as he had blessed us with a boy and this was not 'my' idea of a perfect family - 2 boys and a girl was, I did not understand.  I felt awful that I felt this way - it made no sense.  Looking back I feel disgusted with myself for thinking like this.  I love my boys so much but I think in hindsight it was not disappointment over having another son but grieving that I would not get to have a daughter.

God really spoke to us both during this time.  I remember crying out to God and then the postman dropped a letter through the door.  It was from my granny - the only Christian member of my family.  I don't normally receive mail from her but inside was a little study book about Jonah and another on Mary & Martha.  I read through this and God spoke to us in volumes about our behaviour and my 'perfectionist' sin.  God had been so good to us - through our childish sulking, He saw our pain and He comforted us, not harshly but gently and gave us wisdom.  Gods timing was perfect. I prayed and instantly the answer arrived through my letterbox!

Also as a sideline I think I'm just very emotional and hormonal when pregnant - fair to say a little crazy and irrational!

Anyway, when J was born it was great. Labour started straightaway this time, no build up contractions.  My waters broke and the pain was very intense.  I still had a natural water birth, as had enjoyed the experience with N.  However this time due to the intensity, I wish I had the option of an epidural instead! When he was born, he went blue as had swallowed show and mecconium on his way out.  After a little kick start, J was fine but it was scary. He was so amazing and beautiful - how on earth could I ever had complained? We were going to name him Jonah after our lesson but decided to name him after what we had learnt - J's name means 'thankful' we were so blessed to have him and it really did not matter that he was a boy at all.  I think the thought of living in a house of all boys was scary but in reality it is great.  Children are such a great gift, it doesn't matter whether they are boys or girls.  God had really met with us through this, made me look at my motives behind having a family and made me realise exactly who is in control. 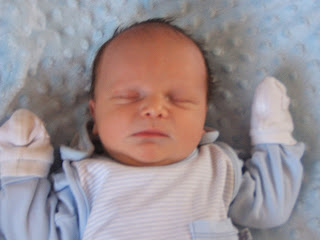